Korea Polar Research Institute – KOPRI is the partner who supported and supports, on the basis of the Framework Agreement between our two institutes, the deployment of ROICE expeditions. 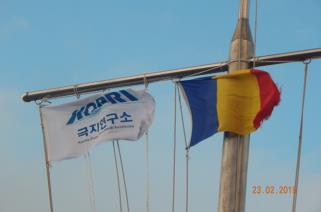 Korea Polar Research Institute (KOPRI) was founded in 1987, as a government supported research institute, specializing in polar sciences and as the operator of the Korean Antarctic Research Programme (KARP). KOPRI has one of the largest research infrastructures in this field, in the world.

Mission of KOPRI – To expand polar activities by broadening the scope of activities of the Korea Polar Research Institute to an international level.

The partnership between the two institutions is conducted by the agreement of the Antarctic Treaty and the Madrid Protocol.

The teams of Romanian researchers of the ROICE expeditions were and are hosted at King Sejong Antarctic Station based on King George Island, from Barton Peninsula in West Antarctic.

King Sejong Antarctic Station, together with the Dasan Arctic Station, the Jango Bongo Antarctic Research Station, as well as the ARON icebreaker, constitute a large and a modern research infrastructure which will enable Korea Polar Research Institute to become the most powerful research organization in the field of polar sciences in the world.

The station was inaugurated in 1988 as a research platform with permanent activity, including during polar winters. Ever since, it has served to support a variety of research fields, such as oceanography, geophysics, geology, life sciences, terrestrial and marine ecosystems studies.

Since its opening to present, the station has been undergoing successive and significant processes of modernization and development. The Republic of Korea presented to ATCM 40 (China, 2016) the BP 03 – “Information on the progress of the renovation of the Korean Antarctic Research Station King Sejong, King George Island in the South Shetland Islands”, station which has been undergoing a major renovation and reconstruction between 2016 and 2017.

The location of the station makes for a strategic advantage for research in Antarctica in all major areas: life sciences, genomic sciences and physical sciences, as well as in interdisciplinary research areas.

The research platform hosts its own scientists and partner researchers, which include: scientific expeditionists operating during polar summers and those who carry on the studies throughout the year.

Their research in life sciences (multidisciplinary research in biological sciences and oceanography) takes place at the station and on board of various ships in the Peninsula region, in order to investigate the biological resources of the area and to study how environmental changes determine fluctuations associated with global warming and the annual ozone layer.

More information could be accessed at the web address: http://www.kopri.re.kr.