The Department for Arctic and Antarctic Research is made up of scientific researchers specialising in life sciences, focused on understanding the evolution and diversity of life in Antarctic and Arctic areas, and who are willing and prepared to participate in research expeditions in cold and isolated environments.

Moreover, the researchers team who is traveling to Antarctica must also fulfil other additional conditions imposed by our partner, KOPRI, which cover both scientific expertise in polar area and commitment to disseminate information, as well as the state of health, safety training to work in the polar regions, compliance of the environmental protection imposed by the Madrid Protocol. 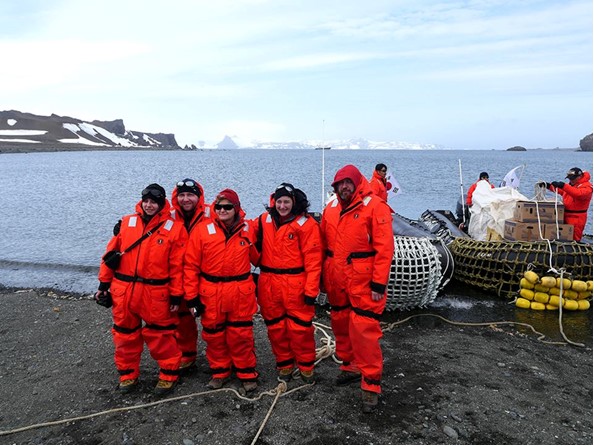 The ROICE 2016 team, presented below, performed Antarctic researches under the coordination of Dr. Manuela Elisabeta Sidoroff – General Director of the National Institute of Research and Development for Biological Sciences and Vice President of the National Antarctic Research Commission (CNCA) within the Romanian Academy, as well as Acad. Octavian Popescu – Director of the Institute of Biology from Bucharest and Scientific Coordinator for Life Science of CNCA of the Romanian Academy.

Senior Research Scientist Grade I, employed at the National Institute for Research and Development for Biological Sciences through the scientific research project ROICE 2016. PhD in Enzymology 1995 – University Paris Sud, France.

She is specialized in extremophile microorganisms, microbial diversity, ecology and evolution, in genetic diversity and population dynamics of bacteria and archaea in glacial environments, in molecular adaptation mechanisms to extreme temperature environment, and in human archaeal microbiota. Also, she is specialized in nanotechnologies and medical applications of extremophiles and extremozymes.

“What if Research, he thought, doesn’t come from a store. What if Research… perhaps… means a little bit more!” (Paraphrase of Dr. Seuss, How the Grinch Stole Christmas!)

His researches are focused on algological and ambient molecular microbiology, on geomicrobiology and metagenomics. He is particularly interested in studies on the biodiversity and functionality of the microbial ecosystems associated with extreme environments such as geothermal springs, alkaline lakes, polar habitats, etc.

“Science knows no country, because knowledge belongs to humanity, and is the torch which illuminates the world.” (Louis Pasteur)

Scientific researcher employed of the National Institute of Research and Development for Biological Sciences within the Arctic and Antarctic Research Department and the Bioinformatics Department.

Her research in the Antarctic environment specializes in analyzing the climatic effects on the human body and its adaptability to extreme environments by studying the viability of erythrocytes with possible implications for blood preservation. She also specializes in flow cytometry, community medical legislation, taxonomy and microbial biodiversity principles, microbial molecular biology and microbiology of the environment.

”Antarctica is otherworldly, like nothing I’ve ever seen before. Stark, cold, beautiful desolation.” (Mark Hoppus)

Researcher employed at the National Institute of Research and Development for Biological sciences within the Arctic and Antarctic Research Department.

„If Antarctica were music it would be Mozart. Art, and it would be Michelangelo. Literature, and it would be Shakespeare. And yet it is something even greater; the only place on earth that is still as it should be. May we never tame it.” (Andrew Denton)

Senior researcher, employed at the National Institute of Research and Development for Biological Sciences within the scientific research project ROICE 2016.

He currently works at the Institute of Speleology “Emil Racoviță”, Cluj-Napoca of the Romanian Academy. He does research in Geochemistry, Paleoclimatology and Geomorphology. He was scientific researcher and Head of the Stable Isotopes Laboratory, Suceava University, Romania (03.2011), and during period 01.2012 – 10.2015 was with part-time researcher at the Institute of Biology Bucharest of the Romanian Academy. He is also specialized in crio-geo-climatic processes from the Antarctic Systems.