Two weeks have already passed since the ROICE team reached Antarctica…But until now we haven’t found the time to write down our opinions or feelings. This happened for only one reason: we tried to make the best out of every day, spending every second outside, taking samples. The weather here can be either your best friend, or your worst enemy, allowing you, or not, to do what you have to. And since today it seems to be our enemy, we are forced to stay inside the station. Taking advantage of this situation, we decided to complete this journal page. In fact, this is a summary of the two weeks that have already past. So many things have happened that it is very difficult to do a retrospective.

The departure from Punta Arenas

We remember the day of the departure from Punta Arenas – February, the 3rd 2015. Although we were supposed to meet the group at 8.30 a.m., we woke up since the early hours of the morning. We were having a lot of thoughts and feelings: „What would our flight to Antarctica be like? How would the weather be? What would our collaborations to the Koreans, our hosts, be like? How often would we be able to step outside, in the field? Who…where…if…?”. All these questions were tumbling around in our heads. But it was time we left them apart. It was already 7.00 a.m. and we had to get down for breakfast. Then we had to meet the group of visitors, in the hotel lobby. We met Sung Gu Lee, the person that the King Sejong Station had named to accompany us. A very friendly, smiling, curious person. We were making friends in no time. ”Where are you from? Researcher? What field?” etc. And that was the moment we learnt we were from Romania, Portugal, USA, South Korea…microbiologists, botanists, zoologists, physicists, etc. A divers and very friendly group!

At 12.30 a.m. we reached the airport. Our luggage was weighed and we received our boarding tickets. Hm… we were really going to Antarctica! We were all smiling. Happy! But we still couldn’t stop talking about what we would be doing there. Maps all over the floor…sampling areas…protected areas…equipment…We didn’t even realize the time was passing by and boarding started. We reached the plane. After a little while we heard in the speakers: „Please fasten your seat belts. In a few moments we are taking off to King George Island!”. At 14.20 we left Punta Arenas, heading to Antarctica!

After one of the longest flights we had experienced, on February the 3rd 2015, at 16.20 local time, we set foot on Antarctic soil. We were there!!! Powerful sun, clear, incredible blue sky! We were very happy and very proud to represent Romania in the ROICE 2015 expedition! Very fast our luggage was unloaded! We had to clear the space for those who were heading back home, wherever that home was.

After a short boat trip, of approximately 20-30 minutes, we reached South Korea King Sejong Station. We were greeted by the head of the station, Dr. IN-Young Ahn,”the captain” how permanent employees call her. We introduced ourselves, exchanged our first impressions and entered the main building. We learned the rules as we went along (for example boots must be left at the entrance of each building and there is special footwear waiting on shelves at each entrance) and, since we arrived at dinner time, we were invited to the very first dinner in Antarctica. At 22.00 there was a meeting with all new guests and the station’s manager presented us all the rules that had to be followed inside the station and outside, in the field (for example all eating hours are exact and are indicated around the station by specific songs; if one has to take a trip at a distance of more than 1 km from the base, he must announce in due time, providing details regarding the approximate area and estimated return hour, and also be joined by another person, etc.). Our hosts are very friendly. Again, we started making new friends. It was going to be a very nice stay! 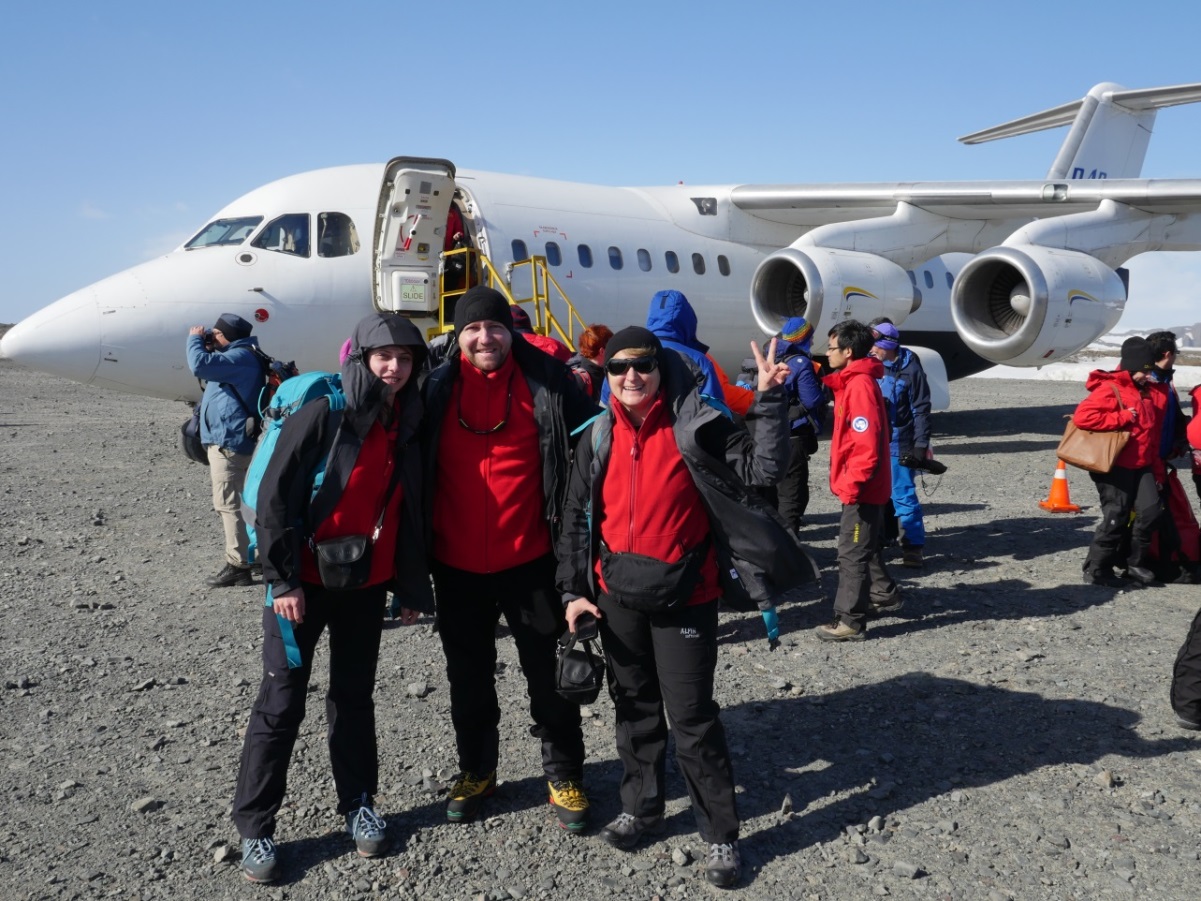 Going out in the field

With great excitement we remember our first exist in the field, on February the 4th. Joao and Lorenco (from Portugal) invited us to take a walk with them up to the penguins’ village (Penguin village or Penguin rookery), located in ASPA 171. That was the moment we first observed the potential sampling areas. The road was pretty difficult but we enjoyed it. The landscape was breathtaking! And besides we were very excited to see lots of penguins! After a 1 hour and a half of walking, we reached the destination. Although it was raining a lot, we were thrilled to be surrounded by penguins curious to discover our reason for being there. We tried to get as closed as we could, without disturbing them. We took pictures of ourselves and the penguins and we took pictures of penguins alone. Due to the rain, we couldn’t stay long. We had to get back to the station. We went ashore and went back. Once we reached the station, a huge surprise was waiting for us and it made us feel extremely proud: the Romanian flag was hoisted!

There were many, tiring expeditions in the field! We walked carrying our backpack. We climbed glaciers, we went down in deep valleys searching for snow, we searched for rivers under the glaciers, etc. Whenever possible, we were joined by other researchers, each doing his job. Collaboration, the basis of the Antarctic Treaty, comes first. We have to mention the ones who became our new friends: Joao and Lorenco (Portugal), Magnus and Pablo (Germany), Joe (USA) and SungGu (Korea), Gonzalo, Jorge and Juanita (Chile). We have spent beautiful moments with them! In short…we have worn out our boots! But unforgettable experiences are still continuing here! And even if every time we were carrying a lot of kilos in our backpacks, in our way to the station, we were saying that we couldn’t do that again, every morning found us enthusiastic about taking the equipment and going out in the field again, regardless of the weather conditions. This only happens due to the curiosity and desire for exploration that help you keep going!

We represent Romania and we do this the best way we can! We have to complete our tasks and get back home with our heads held high, happy and proud!

During the two weeks we had a lot of productive talks with Dr. Soon Gyu Hong, the PI of King Sejong Station, and the one who integrates every aspect of scientific life into a whole. We tell him our research ideas. He is very open and communicative. He wants to know all the details to make sure we find the best collaboration methods. He explains the way he sees things from the point of view of working within the station. Everything is like a house whose room represents a research direction. His task is to make corridors leading to each room. Our task, the researchers, is to „decorate” the room we enter. Hm ..I guess this is one of the most beautiful descriptions I have ever heard!

Dr. Hong also organized research seminars with foreign visitors in order to get to know each other and discover what everyone does there. I can truly say that this was a great idea. During these talks, sometimes prolonged until late in the night, we managed to explain what we want to achieve here and why our research conducted in Antarctica is important. We were also presented the way we might contribute to the long term objectives of KOPRI and of the researchers in King Sejong Station, our hosts.

As we got to know each other better, we started to see things in the perspective of ROICE 2015 objectives. More precise, how can Romania contribute to the international programme for polar research, by collaborating with KOPRI. We started with microbiology studies, but we believe we proved we can contribute, as a country, to many other fields. But every step must be calculated and accompanied by concrete proposals and ideas.

Work, work, but sometimes a little fun is needed!

Friday evenings are about relaxation here, in the King Sejong Station. A kind of „barbeque party” is being organized. A prolonged dinner where moderate consumption of alcohol is allowed. It usually starts at 18.00 and ends at 20.00. So, on Friday evenings, everybody is a little bit different than usual. We are all more relaxed, more friendly, less irritated. We leave worries and work behind. We best remember our first Friday evening (February the 6th). Before dinner began, the head of the station had made a toast welcoming us and showing her joy for having us there. We stood…and everybody cheered. She also mentioned that we were the most numerous foreign visitors the station had had in its 27 years of existence! We felt privileged and proud to be there! It was a pleasant, festive atmosphere. We really enjoyed ourselves! We talked about Romania, about the partnership with KOPRI, about family, traditions. Everyone was smiling, noisy (which does not happen very often here) and friendly. It was a beautiful evening! 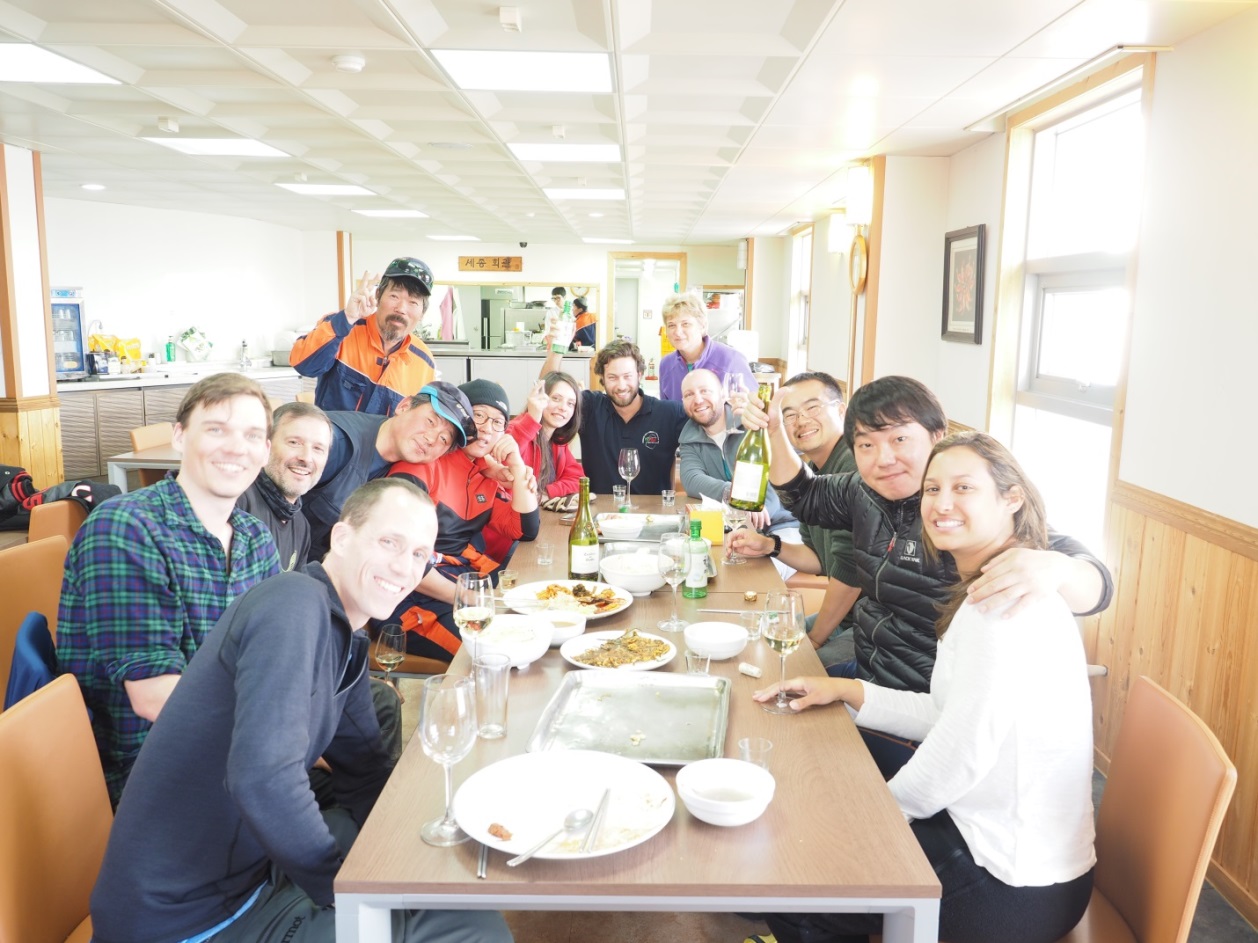 The evening ended with karaoke with all foreign visitors and some Koreans. We all sang and danced. It was a great party! A party that ended at exactly 22.00. By that time karaoke was allowed…

This is the short summary of the two weeks spent in the King Sejong Station, in Antarctica! We could write pages, we know. But time is limited and passes by very quickly here and the laboratory already misses us! It hasn’t seen us since last night…